Continuing a 100-year tradition of dragon parades in Melbourne, Australia

History of Dragons in Melbourne

Processions and parades are an important part of street life in Australia, with the first processions occurring in Melbourne in the 1830s.

Chinese community groups in Australia, have always provided a great spectacle when they proudly parade the Chinese Dragon amidst a fabulous procession of ornately costumed men and women carrying mythical beasts, lanterns, banners, weapons to ward away evil spirits, and accompanied by dancing lions, musicians and noisy fire crackers. As early as 1867, the Chinese were involved in processions in Castlemaine and Ballarat to celebrate the British Royal Tour of the Duke of Edinburgh. In Bendigo and Ballarat, Chinese processions became popular annual events.

The Chinese procession at the 1874 Beechworth Carnival was 200 strong, while the procession as part of the Melbourne Hospital fund raising Bazaar in April 1900 contained 600 Chinese participants from around the state.

The Federation procession held in Melbourne in May 1901, to honour the opening of the first Federal Parliament, included two Chinese Dragons (one from Bendigo and one from the See Yup Society in Melbourne), a Chinese Lion, orchestra and figures on white horses, accompanied by 300 participants. The Duke and Duchess of York arrived in Australia as part of the Federation celebrations. The Royal visit, as much as Federation, became the focus of Melbourne's street celebrations. The streets of the city were decorated, eight arches were constructed and a procession organised.

The Chinese community raised £800 for the construction of a 'Chinese Citizen's Arch' - located across Swanston Street, south of Little Bourke Street - and the £200 necessary for their part in the procession on 7 May 1901. To the disappointment of the Chinese organisers, the Chinese procession was not viewed by the Duke and Duchess. However the procession which extended about half a mile in length was greatly appreciated by the many spectators and the press.

The Dragon is a fantastic animal made up of many elements

Every Chinese New Year, the Spring Festival is heralded with the appearance of the Dragon, who emerges from the bottom of the sea where he sleeps, into the sky to bring plentiful spring rain ensuring good crops for the coming season. 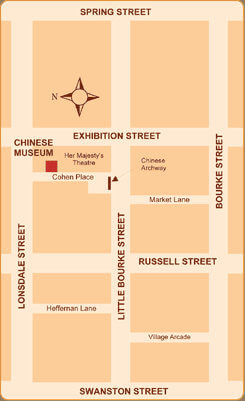 Both the Dai Loong and The Millennium Dragons are on display at the Chinese Museum, 22 Cohen Place Melbourne. Open 7 days. Admission charges apply. Tel: 03 9662 2888

For more information on the Dragon Gallery, visit the Chinese Museum's website